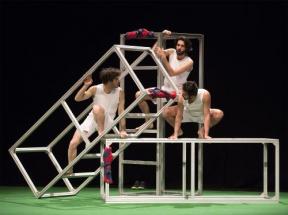 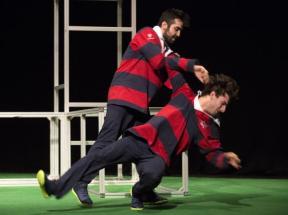 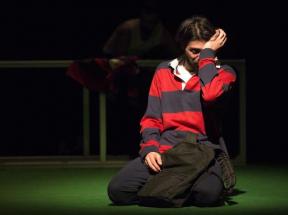 The protagonists are 3 teenagers, three different personalities that establish a rigid and dangerous relationship.
Acts that at the beginning look like jokes among young boys soon become real bullying acts.
An insane sort of game is then established, in which each of the three boys plays a part: the bully, the victim and the spectator-outsider.

It is impossible to change the rules of the game: the acts are repeated over and over again, and the dynamics among the three boys becomes a cage from which nobody knows how to get out.

“Off side” tells about bullying by displaying on stage the critical aspects of the relationships among young people, but without providing solutions to the problem or falling into easy moralism.
The main objective is to give rise to discussion in order to deal with this issue.

The show is the outcome of a project by “SOS - il Telefono Azzurro ONLUS”, a non-profit organisation committed, among other things, to fighting bullying, and La Baracca - Testoni Ragazzi, in its exploration of the uneasy, fragile and critical period of adolescence.
The project was created with the aim of bringing theatre into schools, as an educational instrument to promote the awareness of this issue in children, teenagers and teachers.