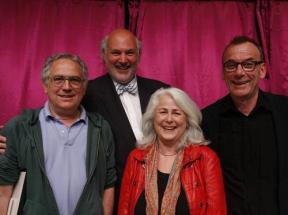 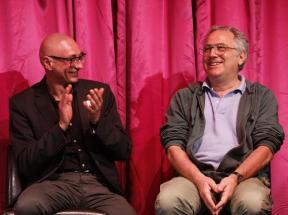 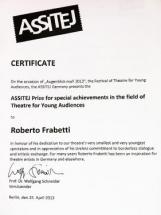 « Roberto Frabetti is honoured with the ASSITEJ Prize 2013 for his tireless commitment to our theatre’s very smallest and very youngest spectators.
As theater artist, researcher and teacher and – foremost – as a networker, as someone who connects people and their interests – Roberto Frabetti has spent the past 30 years or so advocating children’s theatre, especially the theatre from the very beginning. He has experimented artistically in this field. His plays – published also in German at Korn-Wimmer publishers – have proved that it is possible to produce and stage dramatic work based on literary texts even for very young children. His plays document the artistic process in his theater.

They are, at the same time, an important prerequisite for the transfer of his productions to other theatres and other countries.
His theater,– La Baracca in Bologna – has shown early on that there is an audience for this kind of theatre. Many others have since also discovered that there is a great demand. Roberto Frabetti has also been quick to discover that his theatre for the very young provokes a lot of questions and a need fo explanations.

Who asks these questions? The children? Or the parents and educators? Or the theatre artists themselves?
And who gives the answers? Could the children give them? How do theatre makers deal with the fact that their audience is just about to learn how to talk?
Which answers do science and research have to offer?

Pedagogy, psychology, theatre studies, - who does research regarding the question of whether children from birth to five take part in cultural events? Who deals with their experience and perception of theatre? Who is interested in the theatre formats developed in this field? Who researches ways of producing theatre for the youngest? Who thinks about the places and spaces this theatre needs?

Roberto Frabetti has given several answers for himself and put them into practice: He has experimented continually with new approaches, in the arts and with his team. The team is his family. It perceives itself as a collective and works as a co-operative. Additionally, he is himself a teacher at the faculty of pedagogy tracing the connecting lines between theory and practice, research and teaching.

And, he has been quick to discover that an exchange across European borders is necessary in order to learn from each other and develop the field further and in order to form a European movement for the theatre for the very young.

Roberto Frabetti is „Mister Small Size“. He has invented this network for artistic exchange in 2005. He succeeded in acquiring the funds and – this is the most important part – he managed to get the artists into an active discussion about their art. Meetings, publications and performances – also co-productions – are the results of the work that has been done together.

The artistic exchange creates a public interest in the theatre for the very young. Thus, it has great relevance for cultural policy. This became manifest in a publication on the Charter of Children’s Rights to Art and Culture in 27 languages and with 18 theses. Small Size’s primary goal is to make an increasing number of young children, in an increasing number of European countries, experience artists and their performances.

For many years, his work at the Teatro Testoni Ragazzi has been inspiring also the German theatre landscape.
Co-productions like “Uno a uno“ with the Young Ensemble Stuttgart (JES) and the fact that German theatres are involved in Small Size and, last but not least, the project „Theatre from the very Beginning“ (Theater von Anfang an) by the German Children’s and Young People’s theatre centre in the Federal Republic of Germany can be traced back to Roberto Frabetti and his – always networked, always connected – commitment.

In 2008 Roberto Frabetti received the Award for Artistic Excellency by the International Association of Theatre for Young Audiences. In 2013 he is honoured with ASSITEJ Germany’s prize. »

The Award was presented to Roberto Frabetti on April 25, 2013 in Berlin
from Maria Inès Falconi
(Vice President of the ASSITEJ International)