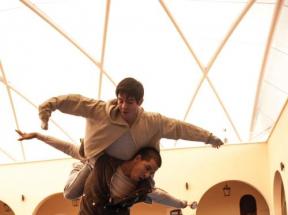 We share the world with beings of whom we know nothing: an ornithologist wants to know about the life of a Mexican bird that has been present in stories, legends and songs since ancient times, the Tecolotito.

On this journey we will meet the Tecolotito, we will be told about its habits and language we will help it to fly home.
From the egg to the bird, from the floor to the sky, from here to there, the bird will set out on a journey to discover who it is and return to its family.

Tecolotito is a play for children from 1 to 4 years, created starting from a concept presented for "Artist Meet Early Years" at the festival Visioni di futuro, Visioni di teatro 2019, in Bologna.