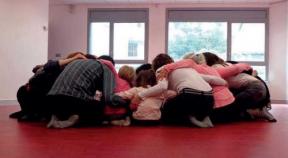 CLOSE YOUR EYES AND MOVE!

How do you listen to movement? How do you perceive it?

Steps, rhythms, the noise of the air, touches, breaths, the rustling of clothes and the hissing of the ground... We’ll experience and experiment with all these sensations, without being guided by our eyes.

We will move with our eyes closed, helping one another and opening the other senses to explore the space around us.

The workshop will investigate sight, hearing, touch and movement, inspired by the idea that the gave life to the show “Tuntu”, a performance created by Dance Theatre Auraco (Finland) for children with visual impairments.