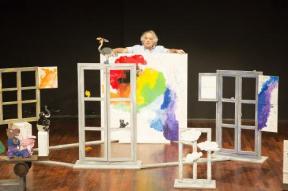 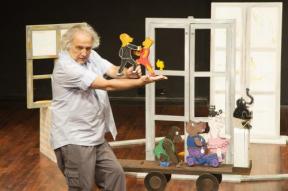 Once upon a time, there was a white fridge, and Elefantenero lived there.

Someone had locked him up, and didn’t let him go out.
The fridge was small, so small, but it had a hole for his trunk so he could breathe the air of the sea, and a tiny window so he could look at the sky and see the clouds, the sun, the rain and the rainbow.

But one day, the fridge opens.
Elefantenero travels and travels, and day after day he stands in front of many windows, big and small, and meets other animals, ready to travel with him: a hippo with a wheeled boat, a mountain gorilla who loves to jump, a white rhinoceros who dances looking at the clouds, a lioness and a lion who dance long and passionate tangos, a distracted giraffe who rides a rocket and an ostrich who knows exactly when the rain will come.

“Mandela’s window” is a surreal narration inspired by Vanni Braga's painting, representing the window through which prisoner number 46664, in his cell, imagined a new South Africa, the “rainbow nation”.