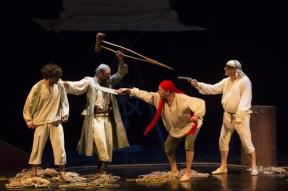 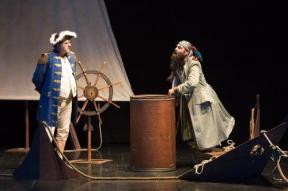 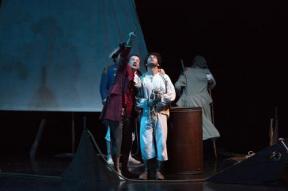 In Stevenson’s novel, everybody is looking for the treasure, but this is not what triggers the characters’ actions: it is the spirit of adventure, the thrill of the journey, the fascination of the sea that pushes them forward.
Actors are pirates, and just like Stevenson’s pirates, gentlemen of fortune. The stage is like a sailing ship.

The kids who come to the theatre help the actors load the ship, and then, in the darkness of the theatre hall, the ship sails and carries all the kids to the dock, waving the pirates goodbye.
The show is a fantastic dramatic play, where the actors have fun interpreting all the characters, scaring each other and telling the audience their story.