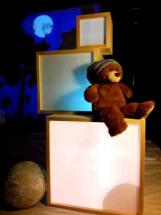 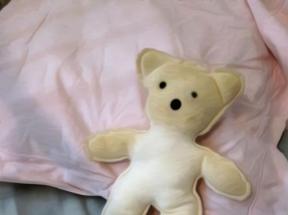 Bimbo, the little bear, loves the sun.
He loves to watch its rays through the window until sunset, when the room, with all his games, turns pink.

After sunset, however, darkness comes.
And Bimbo does not like it at all: everything becomes dark, mysterious... and then, in the dark, it's time to go to bed. And Bimbo doesn't want to sleep!

In all that darkness, however, you can see something... a firefly! But where does it go?
Curiosity is stronger than fear, and Bimbo follows that little light, his guide in the night.

He begins a journey through places known - the city, the park - but which are very different from the usual, with all that darkness...
A journey between shadows and lights always different, which will take Bimbo even to discover the Moon, in a small big flight until he touches the sky.

The night is almost over and you can see the first lights of the morning.
It is possible to go back to the room, and going back to bed.

And the city? The park, the animals... the moon? It seems to find them again in his games...
Was it all a dream?